Your impact on corporate tax systems may be far greater than you think. 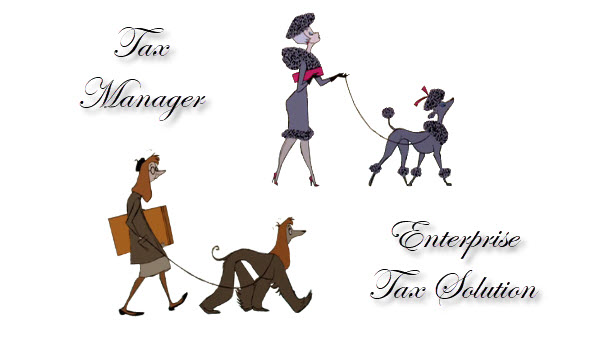 Alex has a special skill. He can read systems. This was not a talent he set out to acquire; one day it just happened. Perhaps it started some time ago when he remembers a financial whizz reading a balance sheet. “Your accountant is stealing from you”, the whizz declared to a startled entrepreneur with only the balance sheet in front of him. Alex wanted to learn this skill, but sadly finance at this level was not his forte. He was a systems guy. But then, a few years later, the following happened.

Alex was at a new client evaluating their systems for a major global indirect tax automation upgrade. After a week or so he turned to his tax manager and said, “Your distribution channels are killing you!” The conversation that followed revealed that this hi-tech consumer electronics company, where the average product has the shelf-life of a banana, was entirely focused on R&D and supply chain. They had never sought to negotiate hard with their distributors, and ended up assuming more risk and responsibility through their sales channels than might otherwise be expected, including for tax.

Then, a couple of years later, it happened again at another client. He declared, “You don’t have the support of your senior management for technology!”. This time his tax counterpart, who had made an effort to acquire some tax technology skills, described how a new boss had told him to engage in more tax technical (meaning traditional legally-based) projects in order to save his career. Disappointed but deferential, Alex mused to himself, “turning your back on technology to save a career when it’s becoming so important is debatable at best, but as a service to your company, it offers them no favours at all“.

… and this matters because … ?

Apply some simple extrapolation and it’s easy to see that Alex has stumbled upon something important. His special insight reveals that digital systems reflect the organization and the people that work within them. On further investigation, it turns out that they somehow reflect the structure, culture, mindset and modus operandi of the companies in which they exist to such an extent that it can be detected by a talented person like Alex. Let’s examine how this is even possible in the first place.

Have you wondered why, in the age of Apple products, enterprise software and applications are still so difficult. The cost of getting technology such as ERP (the cornerstone tax tool for most corporate tax functions), tax engines and tax data repositories to work remains extraordinarily high, while for Apple products it’s all but zero. That is because corporate tax tools are just that, tools!  They require skilled workmen/women to construct the final product, a task that is more akin to making custom furniture than self-assembling a flat-pack.

But how much work must they do? The following diagram represents this by tool type: 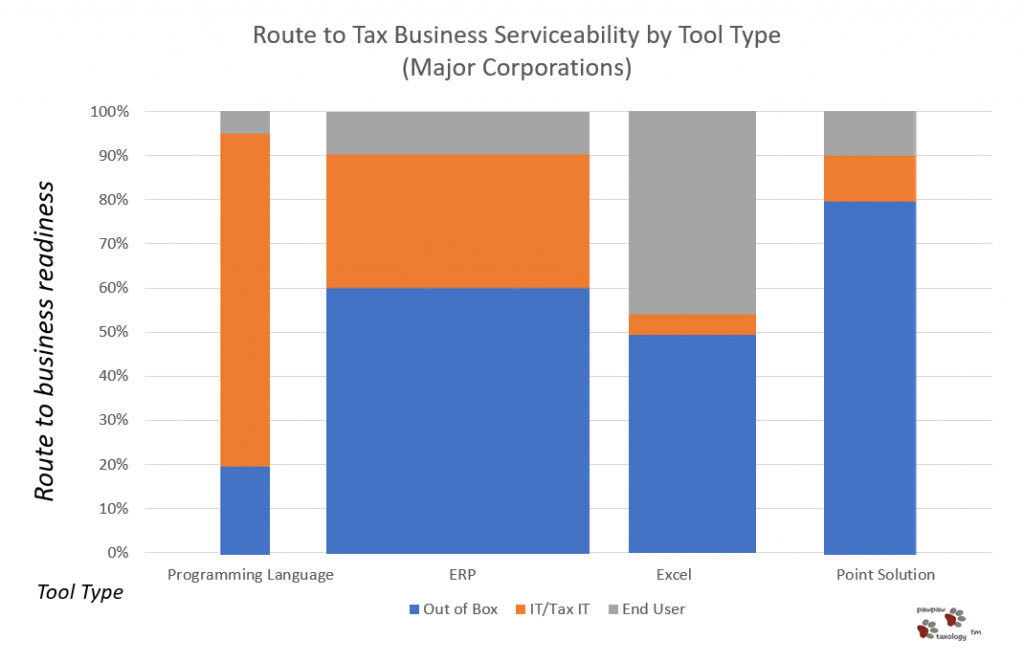 The diagram represents four major tax tool types. Programming languages are included because of the number of corporate tax solutions that, at least in part, are built from scratch. In this case, the tools (programming languages, a database, user-interface platforms, etc.) are low-level, and IT engineers have a great deal of work to do (represented by the area in orange) before a business-ready product emerges.

Point solutions, on the other hand, are those that solve a single business problem in isolation. They are high-level and can be rolled out quickly and easily. External tax engines and some compliance tools fall into this category (as would most Apple products). But these tools are rarely standalone. They rely on their relationship with ERP and the quality of source data. As garbage-in, garbage-out is pandemic in our industry, this puts a damper on their ability to plug ‘n’ play like it says on the tin. Their connection with ERP frequently ends up needing quasi-programmer skills to meet the required quality levels.

Because of its ubiquity in our profession, Microsoft Excel is a tax tool type on its own. The genius of Excel lies in what can be achieved by a non-technical person without specialist IT assistance. However, it remains a low-level (or generic use) tool and leaves acres of room for errors and intractability. Even according to Microsoft themselves, Excel excels (excuse the pun) at information presentation but not enterprise data management, where it quickly hits natural limits. Here, the very flexibility that makes is so popular in the first place becomes its undoing.

This leaves ERP, which is far more generic and flexible than most people suspect—it needs to be, given the broad Byzantine market it serves. On the diagram, the width of the columns represents the importance of the tool for tax. For most, ERP is by far the most important, creating an orange area large in size. This allows plenty of space to inadvertently paint in your own special quirks into its characteristics and behaviours, creating a dog that looks remarkably like its owner.

So, it’s my fault the corporate tax solutions suck—?
Well, not entirely. ERP and the major dedicated tax tools are beasts, and few know how to tame them. Nobody read the manual because there aren’t any (install guides don’t count). With such a big knowledge gap, there’s a tendency to under-estimate or over-simplify the problem. The industry has not adjusted yet. This also explains why the dream-scenario of pressing a button and out pops a completed tax return is such a forlorn one—because the distance between a multi-purpose, generic set of digital platforms and full, tailored business-solution readiness is so great.

Some wonder why IT can’t do it, especially if they have specific experience. However, traditional IT anchors itself in process and technology management, and the final gap between them and tax business is just as big a mystery from their side of the fence. What is needed is a new level of tax industry professional, and Alex’s ability to “see” systems gives us clues about its nature. Think of it this way—if Alex could define and describe what it is that enables him to read systems, encapsulate it, write it down, bring it to bear, make it repeatable, predictable, measurable, and teach others, we would have a very powerful new capability in the tax world.

Well, it’s here and it’s called taxology, and its protagonists are called taxologists. It neither removes the need for tax specialists or IT skills, but augments both and drives innovation. It offers clarity, insight and vision, the lack of which is reflected in the systems clearly enough to be seen by someone like Alex. They really do match their owners and it’s not the software’s fault.

Historically, there may have been valid reasons for this state of affairs, but that is no longer the case. There are no more excuses but beware the impostor taxologist. Click here for a simple way forward on both fronts.

Microsoft and Excel are either registered trademarks or trademarks of Microsoft Corporation
in the United States and/or other countries.